Kouloukoukouloukoukou-stach-stach. Thats what we were singing with Aurore when we arrived to Bratislava, which for us was sounding nothing more than the famous Bratislaboys birthplace. But then we got very surprised ! Bratislava is such a cute city !We were staying in a youth hostel called « Patio Hostel » which was a bit more expensive than our previous hostels, but very nice, as barbecues were organized, as well as a pub crawl and so on…
The first evening, we went for a tour by ourselves. And we discovered a so cute city, so peaceful and from the 16th century.

Then we went for sushies and we reached our hostel to meet very nice people ! A french couple travelling in the other way round as we do, a pre-honeymoon sweedish couple travelling by interrail with who we had a very nice exchange about parties all around europe, with 1euro-beers from the hostel !
The next day we went for a free tour of the city, which was very good, we learnt a lot of things ! First we realized that Slovaks are very peaceful people, they started uprisings always in a peaceful way, they got surprised when they got invaded by russian tanks, they stayed friends with Hungary after being part of them for 3 centuries, they stayed friends with Tchecs when they decided to split in order to boost their economy, they try their best to open their economy and are very optimistic about their future.
Second, they are really funny people, they put a lot of statues in town, just to make people smile and laugh, there is this statue of that guy who after being broken-hearded, decided to offer compliments and flowers to girls in the street, with a very happy smile.

Then, there is this statue, very famous, which is a guy they call « working », which is starring at people, with a huge smile on his face, which was put there… just because, just to be funny, just to make people laugh. Thats a spirit I love !

Then, there is this church, which is completely blue and psychedelic, that they are very proud of, it is such a pleasure for them to get married in this place, and they organise big happy weddings there !

Third, the city is amazingly beautiful, the city center is a small place, in which everything was kept in good conditions, and if I could have taken picture of every single building, it would have been possible ! Here are only a few, so that you can see how good it is !

After the tour, we went to eat traditional food, haluski it is called, it cost 4euros and it is very good, it taste like potatoes but with a gnochi texture, it is very good and full the stomach ! Aurore took a soup which was served inside of a bowl made with bread, full of garlic and she loved it !

After, we went to the castle which is up to the town, for a nice sunset !

At night, we cooked together and we met a very smart guy, from United Emirates, with who the discussion was very interesting and who learned us a lot ! The next day we were going to Vienna, and then to Brno, so our passing by the hostel were fast, mostly to cook and sleep !

What do you think? Annuler la réponse. 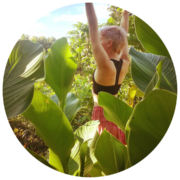